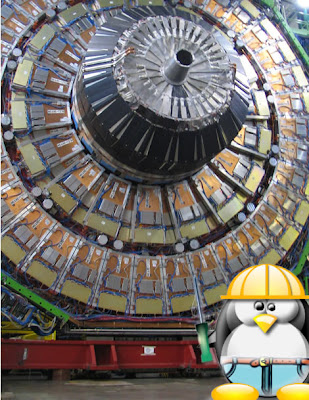 “The most powerful physics project in the history of the known universe – The $10 Billion Large Hadron Collider (LHC)- shot its first light speed beam this morning around its 27 km circuit. Beyond the 20 years it took to build and half of all the world’s astrophysicists, it also takes another key ingredient to make LHC work — Linux.

CERN which is the organization that runs the LHC project is using something called CernVM which is is custom Linux distribution. According to VMware, CernVM runs inside of VMware virtual machines that include PC and Macs across a grid that encompases the power of approximately 40,000 CPUs and some 15 petabytes of data a year.

CERN itself is no stranger to Linux and is one of the lead backers of the Scientific Linux distribution, which is a recompiled version of Red Hat Enterprise Linux.

**UPDATED** Got a comment (listed below) from a commenter with an IP within CERN that writes,”.. the primary configuration for machines in the LHC computing grid (http://lcg.web.cern.ch/LCG/) is based on Scientific Linux distribution running directly on the hardware. This grid is used to receive and distribute the 15PB of data across the 100,000s of CPUs across the world” **

Considering that the LHC, according to some, could be powerful enough to destroy the Earth, create a blackhole or rip a hole in the fabric of space itself, it is somewhat re-assuring that at least some of the key software behind it is not at risk from the blue screen of death.”

Follow us on
Up Next: Dica : Desenvolvimento Web Ágil com Rails